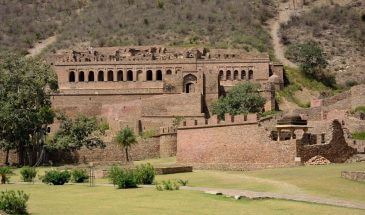 Join our 1 day trip from jaipur one of the India’s most Haunted place Bhangarh & Abhaneri which is famous for Chand Baori Step Well. Trespassing near Bhangarh is legally prohibited between sunset and sunrise. According to locals, spirits enter the place after sunset and thus nobody is allowed to enter the borders of Bhangarh during this time.

The major attraction of Abhaneri is the Chand Baori. The massive stepwell built to conserve rainwater is 20 m deep with 13 levels, is considered deepest and largest stepwell in India. Marvelous carvings on the steps make it to be an excellent piece of architecture. The stepwell stands as an amazing display of ancient engineering. The geometric step pattern gives fascinating and surprising experience to the tourists.

Tour Availabilities: All year round

Tour Activities:  Visit Bhangarh palace one the most haunted place in India & Abhaneri which is famous for Chand Baori step well.

What is not included: Any Personal Expense.

BHANGARH FORT – The Bhangarh Fort is a 17th Century fort built by Bhagwant Das for his younger son Madho Singh.  The Fort is close to Sariska National Park in the Aravali range in Alwar district of Rajasthan State. According to legend, Bhangarh Emperor Madho Singh who built the city after attaining the permission of Guru Balu Nath saint lived within the fort area on the condition that shadow of the fort will not reach his place otherwise his curse will come into play-Bhangarh will be destroyed.

Another story behind the fort Princess Ratnavati her beauty was responsible for the apocalyptic situation which befell the fort. A local black magician fell in love princess Ratnavati. He knew getting Ratnavati won’t be easy so he devised a plan to attract her. He was lucky to see Princess Ratnavati’s mistress in the market and enchanted the oil she purchasing with black magic. Magician added a spell to the oil to seduce Ratnavati consuming the oil would surrender to him. But Princess was also expert in black magic. She spotted the magician in the act. Princess Ratnavati threw the ointment on a boulder which then crushed magician. Before the magician breathed his last, he placed a curse upon the entire landscape that no soul would ever be able to live in peace there. The entir landscape around the Bhangarh Fort has been haunted since.

Abhaneri – The Chand Baori is a stepwell built over a thousand years ago in the Abhaneri village of Rajasthan. It is one of the largest stepwells in the world and also one of the most beautiful ones. Located in the eastern part of the province of Rajasthan, it was built by King Chanda somewhere in the 9th century. The Chand Baori is not an easy landmark to find, thus it is one of the hidden secrets of India! Chand Baori one was built during the 8th and 9th centuries and has 3,500 narrow steps arranged in perfect symmetry, which descend 20m to the bottom of the well. Centuries ago, the stepwells were built in the arid zones of Rajasthan to provide water all year through.

The geometric step pattern gives fascinating and surprising experience to the tourists.

This is one day trip starts early in the morning, volunteers travel in an air conditioned vehicle with travel specialist driver. We will bring first to Abhaneri which is drive of 2 hours from Jaipur. On arrival at the destination, you would be provided lunch and then show you Abhaneri Stepwell. Once the Abhaneri tour is finished, we will bring you to show Bhangarh Fort which is drive of 1.5 hours from Abhaneri. After finishing all sightseeing we would drive back to Jaipur in evening.