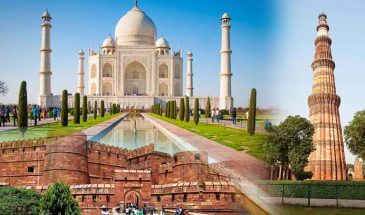 Join our 3 nights/ 4days trip for the Famous Golden Triangle Trip of India. There are no other theme tour besides Golden Triangle Tour can provide you with a full-fledged glimpse of India’s royal and cultural heritage in such a short span. The journey covers the most popular tourist destinations of India- Taj Mahal Agra, Agra Fort, Fatehpur Sikri, Abhaneri, Sikandra, 4 famous places in Delhi, India. The guests are provided with a slice of British, Rajputana and Mughal royalty on the same platter.

What is included: All Transportation by Car, Hotel accommodation in Delhi and Agra, Breakfast at Hotel, Drop off to Delhi airport or desired location in Delhi.

Abhaneri is a a village on the way from Jaipur to Agra. Abhaneri is prominent for ‘Baoris’, which are the unique invention of the natives for harvesting rain water. Amongst the other step wells, Chand Baori is the most popular one. This colossal step well is located in front of the Harshat Mata Temple. Chand Baori is one of India’s deepest and largest step wells. The huge tank with delicate carvings certainly is delightful to the eyes. Step wells are the unique concept of India. These big tanks were used as cool places of resort and water reservoir in parched days. It was a ritual to wash hands and feet before visiting the temple.

Going On the Way to Agra you can also visit Fatehpur Sikri. Fatehpur Sikri is a fascinating ghost city built in the 16th century, 37 km from Agra.

Most of the People who visits Taj Mahal, Agra; they also go to visit Famous Agra Fort which is not more than 2 k.ms from Taj Mahal on same river bank. The Emperor Shah Jahan, who built Taj Mahal was imprisoned by his son Aurangzeb in the Agra Fort where he had a view on the building erected for his deceased wife. Shah Jahan is said to have died in the Musamman Burj, a tower with a beautiful marble balcony. From there you probably have the best view on the Taj. Between the many pavilions, you find small well maintained gardens. After visiting the Taj Mahal we will bring you to show you the Great Agra Fort.

Sikandra – Construction of this beautiful monument was started by Akbar himself. This structure is a perfect blend of Hindu, Christian, Islamic, Buddhist, Jain motifs. But Akbar died before his mausoleum could be completed and his son Jehangir completed it.

At the end of your 2nd last days of your trip you will visit the amazing places in Delhi like India Gate, Qutub Minar andLotus Temple which are must see tourist places of Capital City India.

Day 1:- Start from Jaipur in Morning proceed to visit Agra. We will pick you from your Hotel/Guest house in Jaipur through an air-conditioned Toyota Etios or one of the similar standards Car with well experienced English-speaking Driver. One the way visit Abhaneri and Fatehpur Sikri. You will reach Agra in evening. Check in to Hotel and Relax. We will arrange dinner for you at 8:00 p.m Overnight stay at Hotel in Agra.

Day 2:- In morning visit the world-famous Taj Mahal built by the Moghul Emperor Shahjehan in 1630 for his Queen Mumtaz Mahal to enshrine her mortal remains. Back to hotel for breakfast, after breakfast visit Red Fort of Agra and Agra City Tour. Overnight stay at Hotel in Agra; Dinner is at 8:00 p.m.

Day3:- Early Morning after Breakfast proceed to Delhi which is 230 km's. On the way to Delhi Visit Sikandra. Sikandra is the mausoleum of Emperor Akbar. It represents his philosophy and secular outlook, combining the best of Hindu and Muslim architecture in a superlative fusion. Completed in 1613 A.D., it is one of the well-preserved monuments in the area. Later in afternoon Check in to Hotel in Delhi and relax. Visit India Gate, Buddhist Temple. Overnight in Delhi and have Dinner at 8:00 p.m.

Day4:– Early Morning after Breakfast proceed to visit Qutub Minar and Lotus Temple. After visit we will drop you to airport or your desired location in Delhi. Tour finishes in sweet memories with you.