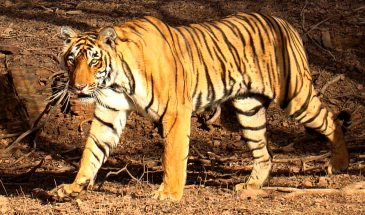 We organize one of the famous Golden Triangle With Ranthambore Wildlife  Tour of India which includes visits to famous tourist spots in Delhi, Agra ,  Jaipur & Ranthambore for 7 Days / 6 Nights. It is a tourist circuit which connects the national capital Delhi – Agra – Jaipur and Ranthambore .

After breakfast drive to Ranthambore , You will go by air-conditioned Toyota Etios or one of the similar standards Car with well experienced English-speaking Driver. Hotel Check in And Relax then proceed to Visit Fort . If you want to do 2 safari in Ranthambore , so we will arrange you . first in the evening and second early in the morning . Overnight stay in Ranthambore Hotel .

Early Morning Jungle Safari in Ranthambore . Ranthambhore is a national park in northern India, covering 392 km² .it was declared one of the Project Tiger reserves in 1973. Ranthambhore wildlife sanctuary is known for its Bengal tigers, and is a popular place in India to see these animals in their natural jungle habitat. Tigers can be easily spotted even in the daytime. After safari procceed to Delhi and We will drop you on your desired location in New Delhi .