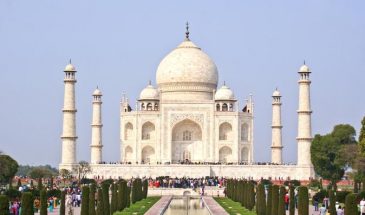 Join our 1 day Taj Mahal day trip from Jaipur the traveler which have very less time in India and want to explore the beauty of Taj Mahal. Traveler can visit the world famous monument Taj Mahal by opting for the weekend day trip. The Taj Mahal is considered to be one of the finest examples of Mughal architecture and is also a UNESCO World Heritage Site. It is also listed among the New Seven Wonders of the World.

Taj Mahal is also known as the monument of love as it was built by Emperor Shahjehan in the memory of his beloved wife Mumtaz.

Program Availabilities: All year around

Tour Activities: You will visit the world famous monument Taj Mahal & also listed among the New Seven Wonders of the World.

What is not included: Any personal expense.

This is one day trip starts early in the morning, volunteers travel in an air conditioned vehicle with travel specialist driver. The drive is about 5 hours long, depending on traffic. On arrival at the destination, you would be provided lunch and then local tour guide will accompany you show you Taj Mahal and give you a proper guided tour. This usually takes around 2 to 3 hours. Once the Taj Mahal tour is finished, volunteers would get an option to visit the Agra Fort if they are interested. After finishing all sightseeing we would drive back to Jaipur.

Taj Mahal – The Taj Mahal is an enormous mausoleum complex commissioned in 1632 by the Mughal emperor Shah Jahan to house the remains of his beloved wife. Constructed over a 20-year period on the southern bank of the Yamuna River in Agra, India, the famed complex is one of the most outstanding examples of Mughal architecture, which combined Indian, Persian and Islamic influences. At its center is the Taj Mahal itself, built of shimmering white marble that seems to change color depending on the daylight.

The Taj Mahal was commissioned by Shah Jahan in 1631, to be built in the memory of his wife Mumtaz Mahal, a Persian princess who died giving birth to their 14th child, Gauhara Begum. Construction started in 1632, and the mausoleum was completed in 1643, while the surrounding buildings and garden were finished five years later.The imperial court documenting Shah Jahan’s grief after the death of Mumtaz Mahal illustrates the love story held as the inspiration for the Taj Mahal.